at Silver Moon Brewing
This event has passed.

Inspired by a passion for old school smoke beers—it’s believed that all beers made before kiln-dried malts came into fashion in the 19th century were smoky—as well as the devastating fire season this year, Diff’rent Smokes celebrates a wide range of beers made with smoked malts or other smoked ingredients. Cocktails featuring smoky or peaty spirits such as Islay Scotch or Mezcal will also be included as well as new, smoke-imbued dishes from The Office, the food trucks in host Silver Moon Brewing’s parking lot.

The festival will include a keg of Schlenkerla Märzen imported from Bamberg, Germany. Schlenkerla, founded in 1405, is so famous for its Rauchbier (“Rauch” means smoke in German and you can figure out what “bier” means) that malts smoked over beechwood are commonly referred to as Bamberger malt, which also happens to be where the family-owned malting company is located. Modern smoke beers may use alderwood, oak, hickory, or cherry wood for smoking.

Deschutes and Cascade Lakes will present traditional Rauchbier lagers while Bend Brewing is making a smoked porter. Boneyard is making a smoked chipotle pepper Mexican lager, Boss Rambler has aged a lager on Mezcal oak with grapefruit for a smoky Paloma beer, and 10 Barrel’s smoked Helles with blackberries are among the more experimental kegs lined up. Other participating Bend breweries include The Ale Apothecary, Crux Fermentation, McMenamins Old St. Francis, Spider City and, of course, Silver Moon.

Two breweries eastward along Highway 26—Tiger Town in Mitchell and 1188 Brewing in John Day—that are rarely if ever seen in Bend will be pouring a smoked porter and a smoked wee heavy (Scotch) ale, respectively. From Madras north on Highway 97, Mecca Grade is an estate malting company and nanobrewery bringing a beer it not only made its own malts but smoked them in house, too. From across the Cascades, Salem’s Santiam is also participating. Three Portland breweries are sending beers—Von Ebert, Threshold, and brand new Steeplejack—the latter two of which are sending a Grodziskie, a once-extinct style of smoked Polish wheat beer resurrected by tradition-seeking craft breweries. And last but not least, all the way from Denver, Bierstadt is a German-style lager brewery celebrated by fellow brewers from around the country and is sending its smoked Helles.

Diff’rent Smokes is a celebration of the end of our extreme wildfire season as well as a show of gratitude to our firefighters. A portion of proceeds will go to benefit the Oregon Volunteer Firefighters Assoc., established in 1957, to train volunteers. 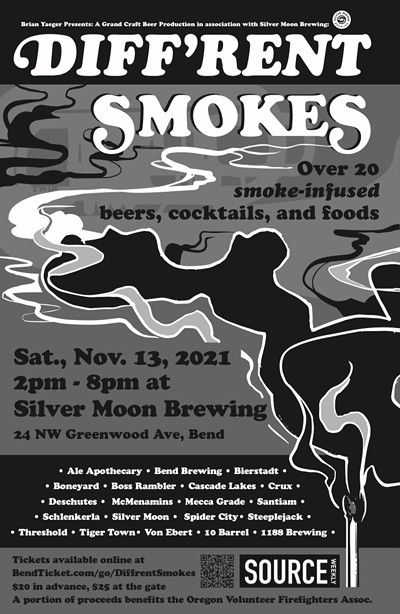